The Jewish Music Institute has commissioned a new programme of interactive musical storytelling for 4-8 year olds lead and performed by Saul Eisenberg’s Junk Orchestra and storyteller Vanessa Woolf with special guest klezmer musician.   Old Jewish stories provide a springboard into other cultures and traditions. Join us as we whirlwind around the world telling enchanting stories of new and old, yesterday and tomorrow.  Vanessa Woolf has so many tales up her sleeve that she won’t have time to tell them all…  Saul Eisenberg invites participants to  join his ever-expanding Junk Orchestra to create a magical soundscape as we embark on our Great Big Story Adventure.

As part of the JMI’s Big Relaunch in October 2012, a young audience of 3 to 8 year olds were treated to the JMI’s Great Big Story Adventure of “Jonah and the Wailers” – a musical magical mystical tour of the story of Jonah and the Whale told through words, music, sounds, textures, lights and movement. With ‘junk musician’ Saul Eisenberg, storyteller Vanessa Woolf and klezmer clarinetist Susi Evans, the story came to life in the children’s eyes and ears as their imaginations were held enthralled in the storyteller’s tale.

Using lights, sounds and found objects Vanessa snaked her way around the space using traditional story telling techniques while Saul, with his fantastic array of found objects which made up his innovative junk orchestra added powerful depth to the story. This was a highly innovative and playful learning experience. The children’s imagination was fed with an array of props and everyday objects, creating wind with giant bubble wrap, using tins and cups to conjure wave noises and rustling sweet papers to mimic starfishes on a beach. 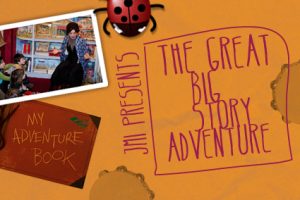 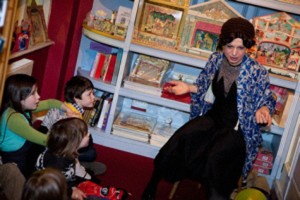 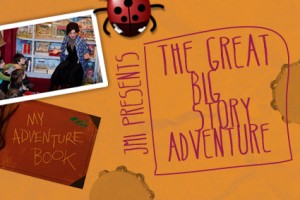