Performing as Jewish musicians would have done in the early days of cinema, Merlin and Polina Shepherd will play Jewish music to accompany this silent film. Their playing acts as the perfect foil for these amazing historic documents. With their deep training, musical experience and by using tradition musical pieces and stylistically accurate new compositions, these films are magically brought back to life almost a century after their first screenings.

7.30pm – Introduction to the performance
7.35pm – Screening with performed soundtrack
8.45pm – Interview between Merlin and Polina and JMI’s Gil Karpas

Merlin & Polina Shepherd perform together in a way that is rarely encountered. Playing Music from several linked cultures and maintaining the styles, they also incorporate improvisation, freedom and spontaneity.

Сlarinetist, composer Merlin Shepherd, a uniquely innovative force in the klezmer renaissance, and Polina Shepherd, a virtuosic vocalist, pianist, composer originally from Siberia blend traditional and newly composed Yiddish and Russian song with klezmer and southern Mediterranean music. Full of passion, depth & subtlety not often encountered in our global village, their style which has its roots in traditional forms takes us to new dimensions.

Merlin is one of the world’s leading players of traditional East European Klezmer Clarinet style, and apart from his own ensembles he has recorded and played with Boban Marcovic, Fanfara Ciocarlia,  Fanfara Savale, Selim Sesler, Budowitz, Frank London’s Klezmer Brass Allstars and numerous others.

Polina Shepherd grew up singing and playing piano at family gatherings where she learned to spontaneously accompany her Cossack /Jewish family singing table songs and art songs of Russia. She toured with Simkha, Russia′s first klezmer band after Perestroika.  Since moving to the UK in 2003 has been teaching, composing and touring with various projects internationally. She has composed over 100 Yiddish and Russian songs. www.polinashepherd.co.uk 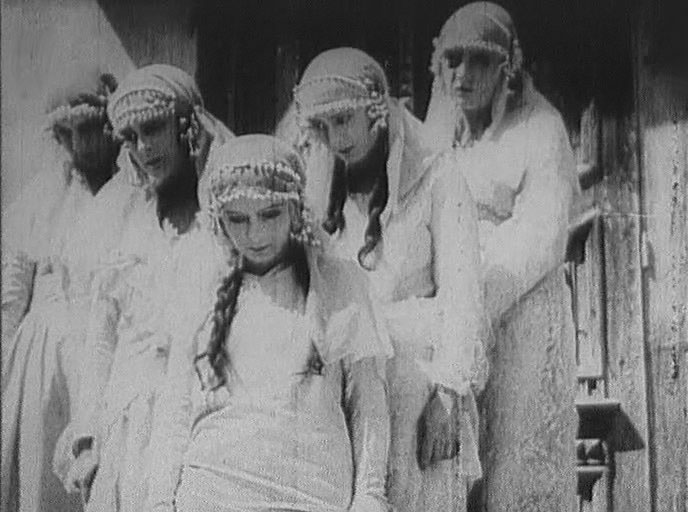 This is an amazing piece of Soviet agit-prop from 1930. Made by Ukrainian Film Director and former Red Army soldier, Aleksandr Solovyov. He brings astonishing narrative, action and direction. Cinematography by Albert Kyun brings us almost-dizzying camera tilting, close-up, panning shots, camera rolling etc. The minimalist yet meaningful screenplay is by Dovid Maryan.

A peaceful Jewish village in Ukraine is under threat from the Petliurian Army. Symon Petliura’s soldiers fought against the Red Army and the Bolsheviks. They demanded Ukrainian independence. Part of their plan was to carry out pogroms against anyone who wasn’t Ukrainian enough, as can be seen in this film.

A commander kills an old woman in the village square and a small group try to retaliate but get nowhere. The evil commander then threatens a pogrom and to burn the entire village. Unless the villagers agree to give five virgin girls (five brides), for the pleasure of five Officers.
The Jewish council decides they have no choice. They sacrifice their daughters to the drunken officers. The selection scene of which of the women will be sent, is heart-wrenching.

All is not lost and a detachment of partisans of the Red Army comes to free the brides and the village. Although the last reel is missing, the film narrative retains all its power and emotion. It builds the pace to a fantastic and dramatic crescendo. And we’re left with a superb cliff-hanger.

The Yuri Morozov film archive (Kiev) contains some of the earliest cinematic representations of east European Jewish communities and more. Black and White silent films as early as 1910 depict the Jews of Ukraine and their daily lives in both narrative and documentary forms. The films cover many aspects of Jewish interest, from Biblical times to modern life at the beginning of the Soviet Era. Many of these films have never been seen outside of Ukraine and some have not been screened for over 80 years.

Merlin and Polina Shepherd represent two nations although their families come from very close geographical locations. At the end of the 19th Century, Merlin’s great-grandparents  emigrated from Ukraine and Romania to escape pogroms and seek a better world in the west. Polina’s grandparents escaped from the Sho’ah (Holocaust) by fleeing from Kiev/Odessa to Siberia. The different and yet vital sustenance of his western Jewish upbringing and her eastern one have brought them to a unique closeness in musical, creative and spiritual terms.

Performing as Jewish musicians would have done in the early days of cinema, Merlin and Polina Shepherd play Jewish music to accompany these silent films. Their playing acts as the perfect foil for these amazing historic documents. With their deep training, musical experience and by using tradition musical pieces and stylistically accurate new compositions, these films are magically brought back to life almost a century after their first screenings.

By transportation backwards in time with this historically accurate visual and aural experience, these two world-class musicians bring their audiences forward to a deeper understanding of former and present day Yiddishkeit.