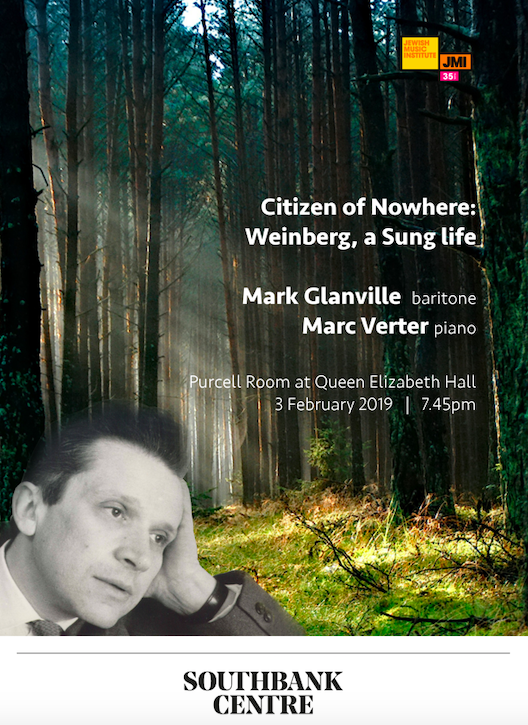 Mieczysław Weinberg, best known as composer of the remarkable Holocaust-themed opera ‘The Passenger’, also wrote over 200 songs. Many remain unpublished, yet they represent a major contribution to C20 vocal repertoire.

Glanville’s selection tells the story of the composer’s life through his music, starting with an early, lyrical setting in Weinberg’s native language of the great Polish-Jewish poet Julian Tuwim. When the Nazis invaded, Weinberg fled Poland for Minsk and then Tashkent. His father, mother and sister were murdered in the Trawniki concentration camp. Jewish musical motifs inform the dark Yiddish nursery rhymes of I.L. Peretz, while Weinberg’s settings of Shmuel Halkin’s harrowing verse are among the most powerful musical evocations of the Holocaust ever penned. His genius was recognised by Shostakovich, who brought him to live in Moscow after hearing his First Symphony. Many of his songs reflect the sound world of his adoptive country, though his musical language remains uniquely his. His association by marriage to the great Jewish actor Solomon Mikhoels, who was murdered on Stalin’s orders, led to his imprisonment. Despite Shostakovich’s intercession with Beria, Weinberg was released only on the dictator’s death in 1953. Weinberg’s life symbolises the plight of the mid-C20, middle-European Jew. His songs, sometimes humorous, often dramatic, frequently poignant, together form as powerful a musical evocation as any of the tumultuous times he lived in.’