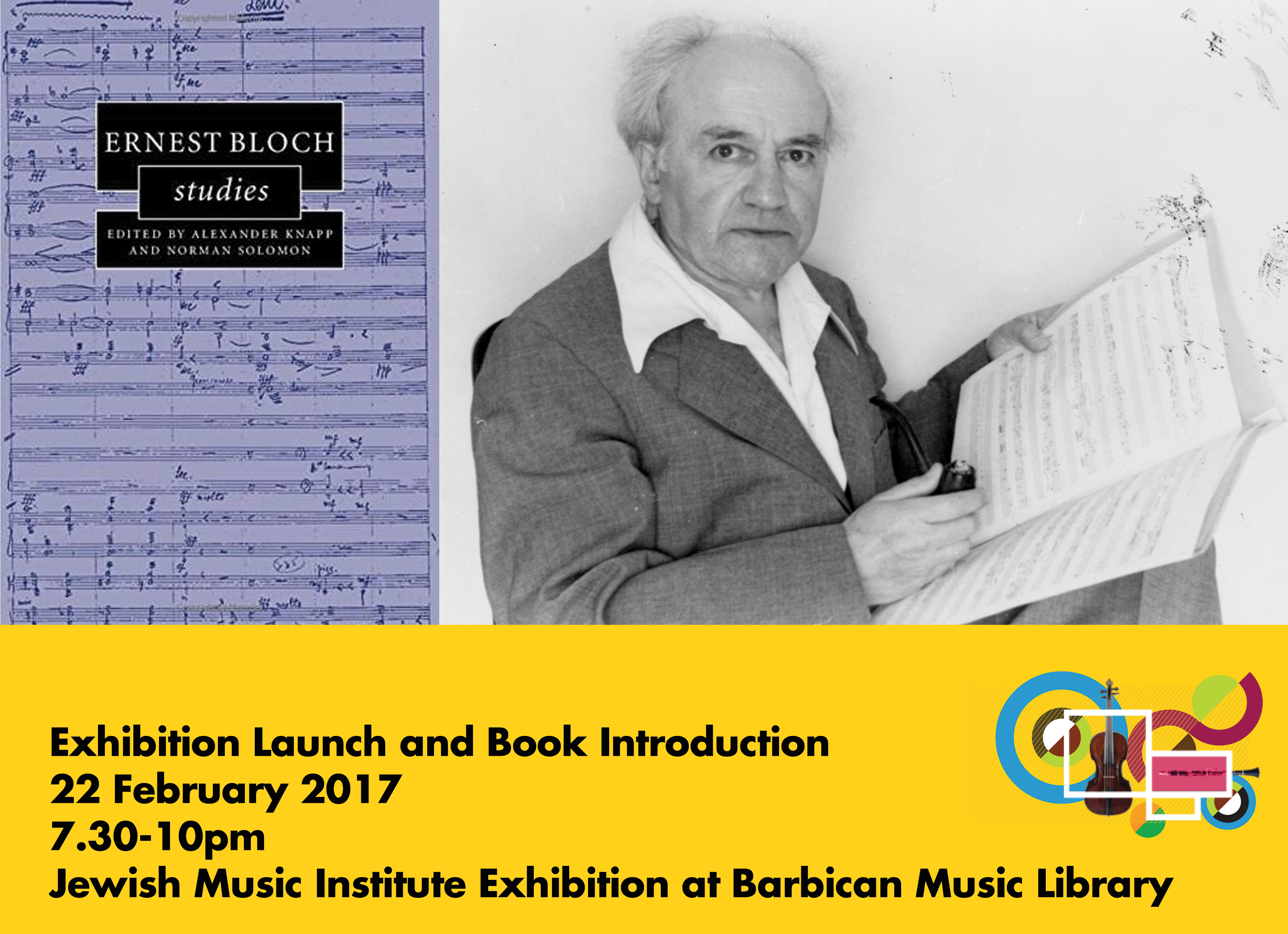 Jewish Music Institute – JMI – are honoured to partner with Barbican Music Library from 22nd February to 19th April 2017, presenting an exhibition of key archive and current work. JMI are proud to announce an introduction to Ernest Bloch Studies co-edited by Alexander Knapp and Norman Solomon, on the opening night Wednesday 22nd February 2017.

Ernest Bloch left his native Switzerland to settle in the United States in 1916. One of the great twentieth-century composers, he was influenced by a range of genres and styles – Jewish, American and Swiss – and his works reflect his lifelong struggle with his identity. Drawing on firsthand recollections of relatives and others who knew and worked with the composer, this collection is the most comprehensive study to date of Bloch’s life, musical achievement and reception. Contributors present the latest research on Bloch’s works and compositional practice, including studies of his Avodath Hakodesh (Sacred Service), violin pieces such as Nigun, the symphonic Schelomo, and the opera Macbeth. Setting the quality and significance of Bloch’s output in its historical and cultural contexts, this book provides scholarly analyses as well as a full chronology, list of online resources, catalogue of published and unpublished works, and selected further reading.

Norman Solomon was Lecturer in Jewish Studies at the University of Oxford until his retirement in 2001. Prior to that, he spent 22 years as a rabbi and 11 years based at the University of Birmingham involved with international activity in inter-religious dialogue. His publications include Judaism and World Religion (1991), The Analytic Movement (1993), A Very Short Introduction to Judaism (2nd edition, 2014), Historical Dictionary of Judaism (3rd edition, 2015) and Torah from Heaven (2012). His honours include the Sir Sigmund Sternberg CCJ Award in Christian-Jewish Relations (1993) and the Distinguished Service Medal of the University of San Francisco (2000).

Convenor of the International Society for Suppressed Music, Peter is a musician, author, and academic  He has worked across Europe and Australia as a singer and conductor specialising in Australian and European music of the early twentieth century and is currently a Teaching Fellow and Director of Undergraduate Studies at Royal Holloway University of London.

David R. Prager studied Chemistry at King’s College, University of London. Following a prestigious career at British Petroleum, he led the staff through the buy-out of its speciality chemicals trading subsidiary to become Managing Director of IMCD UK Ltd and Chairman of its Pensions Trustees. He retired in 2008. He has had a lifelong interest in chazanut and has studied the recordings, films and biographies of the leading cantors of the world.

CE of JMI and daughter of famous Jewish Bandleader Joe Loss LVO OBE, who founded the Joe Loss Lectureship in Jewish Music in memory of her late father, will be presenting an exhibit case on the lectureship and the work that the JMI does throughout the year.