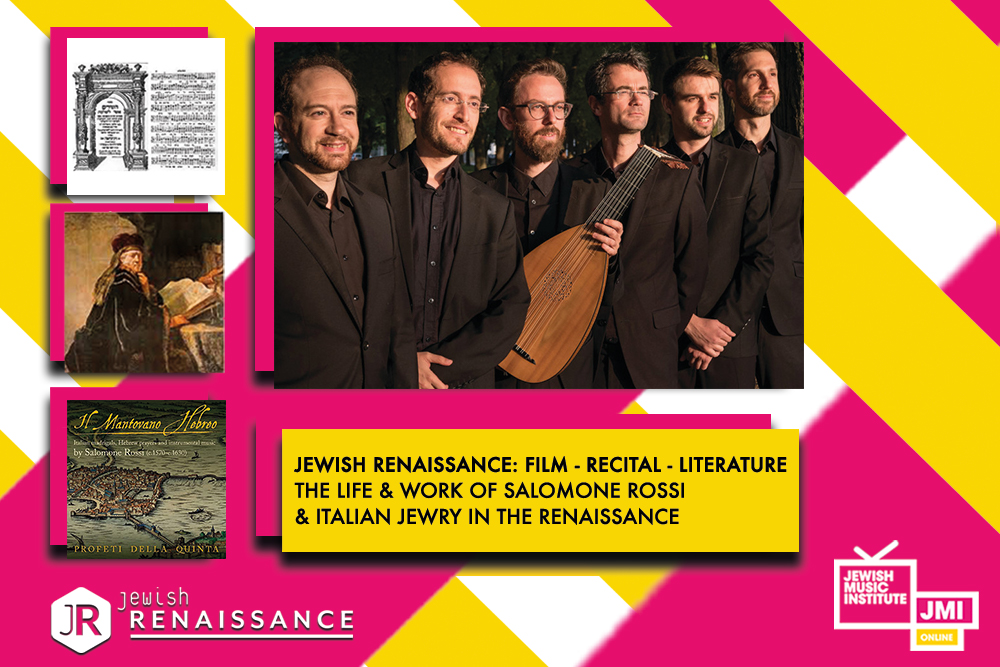 JMI – Jewish Music Institute are honoured to partner with Jewish Renaissance magazine to bring you an evening of music and insights into the Jewish music of Renaissance Italy.

You can watch the programmes at 7.30pm GMT on our Facebook page on on our website here at this page or on the front page.

There are only a limited number available, so grab your reduced subscription now*.

*This offer is for new subscribers to Jewish Renaissance only. However, if you are a current or former subscriber, you may use it to purchase a gift subscription.

In the late Renaissance, at the height of Mantua’s artistic splendour, a young Jewish violinist burst through the barriers of discrimination and became one of the most renowned composers and performers at the court of the Gonzaga dukes. And in 1622 he revolutionized Jewish music with his Songs of Solomon, the first collection ever of originally composed music for Hebrew psalms and prayers. Yet very little is known about the personal and creative life of Salomone Rossi Hebreo – Salomone Rossi the Jew.

In this documentary, the prize-winning vocal ensemble Profeti della Quinta rehearse and perform Rossi’s music in the magnificent town of Mantua, in preparation for a special concert in the Gonzaga dukes’ pleasure palace. With the help of expert historians and musicologists, they shed fascinating light on this elusive man and his extraordinary music.

Streamed exclusively at www.JMI.org.uk and JMI and JR’s Facebook page.

Ensemble Profeti della Quinta, directed by Elam Rotem, focuses on the vocal repertoire of the 16th and early 17th centuries. It aims to create vivid and expressive performances for audiences today while, at the same time, considering period performance practices. From its core of five male singers, the ensemble collaborates regularly with instrumentalists and additional singers.
This performance will feature the compositions:

“Joseph and his Brothers” (Excerpt)
and
“The Lamentation of David”

Here on this website we will bring you article from Jewish Renaissance that illuminate the lives of Italian Jewry of the Renaissance period.