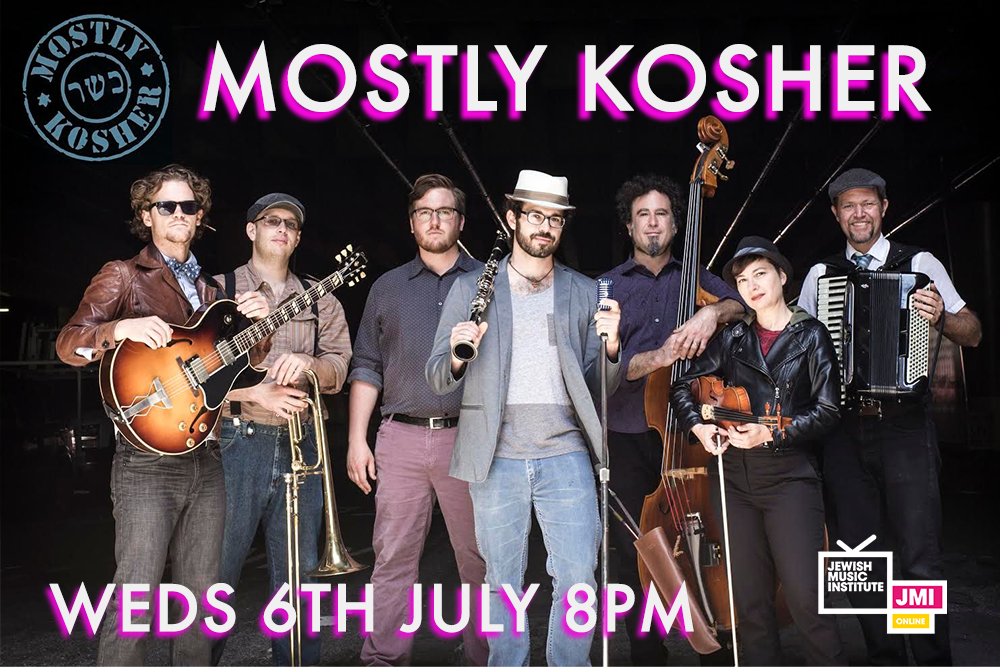 MOSTLY KOSHER is a musical feast that explodes into a global food-fight of Jazz, Latin, Rock, and Folk. In response to the poetry and folk music of Judaic roots, their original voice resounds with themes of social justice, human dignity and mutual understanding. Led by frontman Leeav Sofer, one of Jewish Journal’s “30 under 30” most accomplished professionals in the Los Angeles Jewish diaspora, Mostly Kosher is comprised of some of the highest regarded Los Angeles musicians: violinist Janice Mautner Markham, drummer Eric Hagstrom, bassist Adam Levy, accordionist Gee Rabe, trombonist Taylor Covey and Aníbal Seminario on clarinet and sax.

On Wednesday, July 6th at  12:00 p.m. PT / 3:00 p.m. ET / 8:00 pm UK time – the second Secret Chord Concert will  air live via Facebook on the Facebook pages of The Weitzman, the Lowell Milken Center for Music of American Jewish Experience and the UCLA Herb Alpert School of Music. The series will be available on-demand after the event on the above Facebook pages, The Weitzman’s website, and on the Lowell Milken Center’s YouTube page.

Secret Chord Concerts is a free on-demand video series featuring 15-25 minute performances from celebrated Jewish musicians representing a broad range of styles, heritages, and histories and recorded live in front of intimate audiences in Philadelphia and Los Angeles. Season 1 episodes will air the first Wednesday of every month from June until October.

A cross-country partnership between the Weitzman National Museum of American Jewish History (The Weitzman) on historic Independence Mall in Philadelphia, and the Lowell Milken Center for Music of American Jewish Experience at The UCLA Herb Alpert School of Music (Lowell Milken Center) in Los Angeles, generated this new online offering. Both presenting organizations are committed to inspiring in people of all backgrounds a greater appreciation for the diversity of the American Jewish experience. This season’s episodes were filmed at The Weitzman, against the striking backdrop of Independence Hall, and in UCLA’s beautiful recording studio.

“I’ve had the idea of a Jewish ‘Tiny Desk’ style series in my head for years,” said Dan Samuels, The Weitzman’s Director of Public Programs. “When people think of ‘Jewish music’, they tend to think of klezmer, which itself is deeper, more nuanced, and less monolithic than many believe. With the expertise and support of the Lowell Milken Center, Secret Chord Concerts will spotlight the latest in Jewish music across genres, which truly reflects the diversity and complex cultural landscape not only of the Jewish community, but of America.”

“We couldn’t be more pleased to partner with The Weitzman once again in presenting this new endeavor,” said Lorry Black, Associate Director of the Lowell Milken Center. “Our shared vision of how music reflects all aspects of the American Jewish experience, from East Coast to West, guides this joint effort. We’re excited to expand audiences for these outstanding musical artists and introduce new people to their incredible music.”