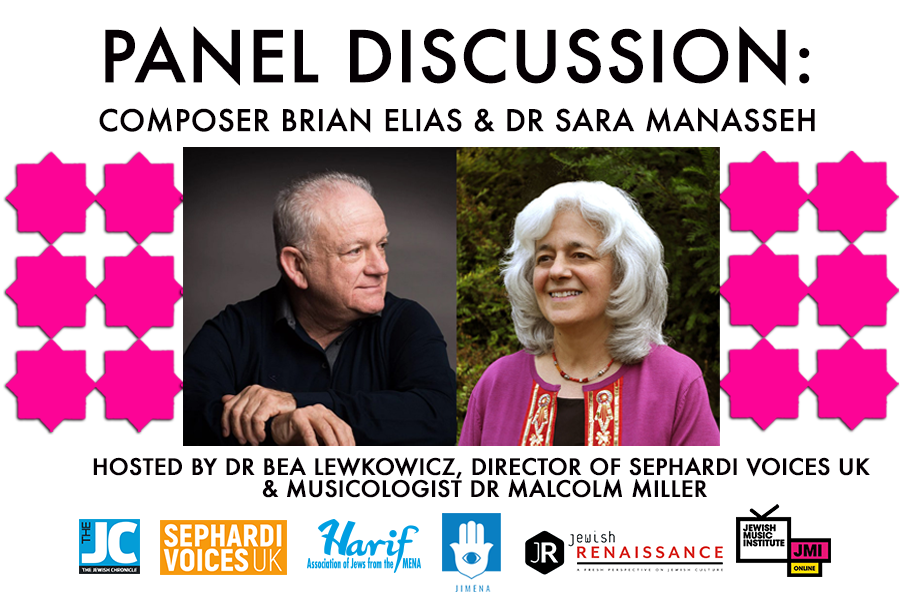 Composer Brian Elias joins ethnomusicologist Dr Sara Manasseh in conversation about their lives and their musical influences. Both were born in Bombay (now Mumbai) to Iraqi Jewish families. The panel discussion, hosted by Dr Bea Lewkowicz, Director of Sephardi Voices UK, and musicologist Dr Malcolm Miller will explore the impact of cultural heritage and identity on musical and creative journeys, illustrated with a selection of traditional and contemporary musical compositions.

Brian Elias was born in Bombay, India, and has lived in the U.K. since he was thirteen years old. After studying at the Royal College of Music he undertook private studies with Elisabeth Lutyens. His first major orchestral work L’Eylah was premiered at the BBC Proms in 1984. He has since had his works performed and recorded extensively by leading orchestras and soloists including the BBC Symphony Orchestra, the Britten Sinfonia, Psappha Ensemble, Jane Manning, Roderick Williams, Nicholas Daniels, Natalie Clein, Leonard Elschenbroich, and the Jerusalem Quartet. His monumental Five Songs to Poems by Irina Ratushinskya was premiered in 1989 and secured his reputation as one of Britain’s preeminent composers. Elias collaborated with Kenneth MacMillan on his final ballet The Judas Tree, premiered in 1992 at the Royal Opera House. The Judas Tree has subsequently been revived on numerous occasions by the Royal Ballet and toured internationally. He has won two British Composer Awards – the first for his 2010 work Doubles, and the second for his 2013 work Electra Mourns.
He has taught composition at the Royal Academy of Music and the Purcell School, and his students have included Joby Talbot and Darren Bloom. His works are published by Chester Music.

Dr Sara Manasseh is an ethnomusicologist and performer of the music traditions of the Jews of Iraq. She was born in Bombay, moving to London (UK) in 1966. Her family, originally from Baghdad, settled in Bombay during the 19th and 20th centuries. She is a direct descendant of David Sassoon, who fled persecution in Baghdad, arriving in Bombay in 1832. Dr Sara Manasseh is the founding director of the ensemble, Rivers of Babylon (London, 1999), performing religious and secular songs in the Iraqi Jewish tradition, middle-eastern instrumentals and vintage Bollywood songs. Her PhD dissertation (1999, London), based on fieldwork in Ramat Gan (Israel), addressed Iraqi Jewish women and secular song. She was appointed Senior Lecturer in Music at Kingston University, Surrey and has also lectured in Jewish Music at SOAS (School of Oriental and African Studies). Her publications include the book, Shbahoth – Songs of Praise in the Babylonian Jewish Tradition: From Baghdad to Bombay and London (2012, Ashgate: SOAS Studies in Music Series) with accompanying CD.