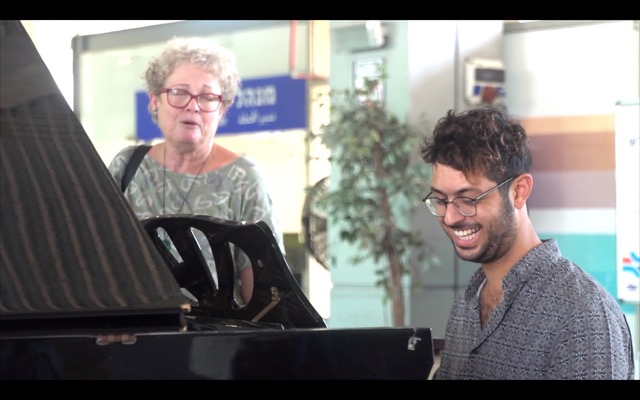 Thousands of hurried commuters pass through Tel Aviv Savidor Central railway station every day. A modest piano placed at its centre transforms the station from an inherently impersonal place to a site of self-expression and reflection as passengers – representing the whole gamut of modern Israeli society – stop by to play and sing. Whether it’s the national anthem or an Amy Winehouse song, the piano allows for a few precious moments of peace and solidarity where you would least expect it. A heart-warming and life-affirming portrayal of public life in Israel today.

“We are proud and excited to bring you the 25th anniversary edition of the UK Jewish Film Festival (4-8 November), which is back in cinemas, as well as available online in your homes. UK Jewish Film is always proud to partner with JMI, whose wonderful work we appreciate and support. As a musician myself, music has always been key to my outlook on what makes a film successful and is central to my own personal film favourites. This year, among our 50+ films, we draw your attention to the wonderful French-Jewish family drama Rose (in cinema only), with its treasure trove of Yiddish and Mizrahi songs, and to Tuning (online only), a documentary that demonstrates the power of a humble train station piano to bring a diverse nation of Israeli commuters together.We hugely appreciate your support and look forward to welcoming you to the Festival.”
Michael Etherton, Chief Executive, UK Jewish Film